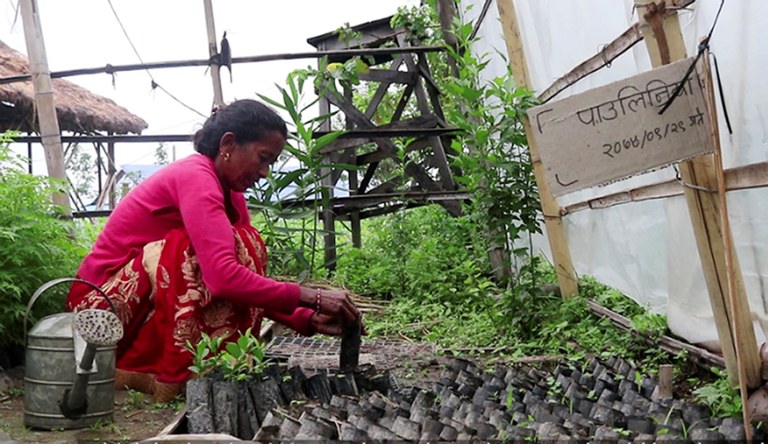 RATANPUR, Nepal – In the paddy terraces there are no longer children playing. Or the sound of young men singing to their beloved, reverberating in the surrounding hills. The cuckoo bird is the loudest living soul in the village but her songs are drowned when the floodgates of the sky open during the monsoon.

“You don’t find young men here. All of them have left,” says Ram Kumari Pandit, who is in her 60’s.

“Our sons have migrated abroad to look for jobs. Their wives have left the village in search of a brighter future for their children in cities,” she explains. This village could be any other in the country.

Pandit is one of the thousands of senior citizens who are left behind villages across Nepal. Just like the young men and women of Ratanpur, more than 1,500 Nepalis, most of them young men, leave the country every day in search of work. An equal number, if not more, move from the villages to the cities.

The shortage of able-bodied men and women who can work in the fields has had a devastating effect on rural households. The numbers speak for themselves: more than 21 percent of arable land in the country remained fallow last year and Nepal was ranked 81st in the Global Food Security Index.

However, in Ratanpur, the terraces tell a different tale. The village, located around 200 kilometers west of Kathmandu, is where the remaining women have taken up a seemingly impossible mission—to make it profitable for villagers to stay at home rather than leave to seek opportunities. Their modus operandi: utilize money from private carbon emitters in Europe to rejuvenate barren land and breathe life into the village once again.

Schmidt and his team members from Ithaka Institute, a scientific organization based in Switzerland and Nepal, established a carbon credit program where private individuals would be charged $35 USD for every ton of carbon they emit. This would cover all costs to setup the forest gardens and their maintenance for three years. The farmers would receive money for taking care of their trees. Schmidt says that Ithaka calculated the price of carbon by looking at the overall cost of the project and resources needed to sustain it.

Under the scheme, environment-conscious people like Sibylle Maurer-Wohlatz who lives in Germany pay a subscription fee to offset their personal carbon footprint. “I spend as much money as is needed to compensate my personal emissions by letting trees in Nepal grow. Trees are, as long as they grow, a medium to store carbon. (For me) this is a sum of 27 Euro ($30 USD) each month,” she says.

“Because I am still causing CO2 emissions with my way of life, I wanted to compensate in a way that really works. Because the richer countries profit worldwide from the resources of the poorer countries, I was very pleased, when Hans Peter Schmidt told me about his project and the intentions to let people compensate their emissions by giving money to plant trees in devastated areas in Nepal to give small farmers the chance, to stabilize the environment, the earth and to improve their agricultural conditions.”

A step towards carbon farming